I feel like drinking an oil can of Foster’s right now. Australian book blogger Michelle Auricht has featured my e-book “Queens are Wild” on her Novels on the Run website. Fittingly, she’s from Queensland! And the bad guy in the book is from Melbourne. Thanks Michelle!!!
Here’s the link:
http://novelsontherun.blogspot.com/2012/10/random-posting-71-author-spotlight-jack.html?spref=tw 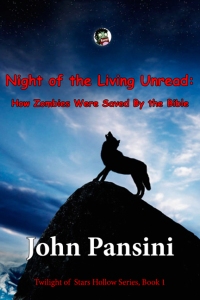 With Halloween and a presidential election both looming — it’s your call on which is more frightening — there is literally no better time than right now to read John Pansini’s laugh-out-loud, satirical e-book “Night of the Living Unread.”

Pansini’s two-pronged parody of teen fiction, with its unrelenting parade of vampires, werewolves and zombies, and of non-fictional right-wing creatures, with familiar names like Romney, Ryan, Santorum, Palin, Reilly, Limbaugh and Bachmann, is a hilarious treat.

The story is set in the fictional town of Stars Hollow, Conn., in the year 2112 — exactly 100 years from now — so the entertaining cast of characters are descendants of the current political players. Sorry Rush fans, there is no reference to your favorite Canadian rock band’s masterpiece album 2112 from the 1970s. There is, however, a twisted dose of Rush Limbaugh. His descendant, Russell, is the Democratic mayor of the town. The Rush of today would be spinning in his grave over that betrayal to the family name. Russell’s town is caught in a deep freeze that lasts much of the year. Global warming has altered the jet stream and pushed North America to the brink of an ice age. Fittingly, many Americans have fled south to the warmer climate of Mexico where they are now illegal aliens in that country!

But the hearty souls of Stars Hollow press on and drive around in snowmobiles, including main character Willard M. Romney III, descendant of our current Republican candidate for president. We meet the 60-something adult services librarian aiming his shot gun, which he affectionately calls Skeeter, at two “miscreants.” The young man and woman had broken into Willard’s Stars Hollow Public Library in the early morning, stolen books off the shelves and loaded them into a shopping cart with intent to burn them later for warmth. Two of Willard’s fellow librarians — 50-something Lorelei, one of Romney’s two love interests in the book, and 80-something Phyllis — had failed to talk Willard out of sneaking up on the thieves with Skeeter in this memorable exchange:

Lorelei: “Don’t you think that’s a tad extreme?”
Willard: “Stealing literature is extreme.”
Phyllis: “But they’re stealing from the teen and young adult collection.”
Willard: “Even so.”

Pansini’s skillfully deadpanned dialogue and descriptions throughout the book make this tale a joy to read. There are some typos and missing words in the text, but I personally didn’t mind because Pansini’s writing style is brilliant and the story is addictively funny.

Willard, who drags his inseparable cat Seamus to and from the library every day in a pet carrier aboard his snowmobile, is a fantastic lead character. He is so principled about his role at the library — his platform clearly includes a strong national defense of all books, good and bad — that he ends up blowing away the miscreants. With the help of his ever-loyal female colleagues, he shoves their bodies into the pile of frozen corpses behind the library. Apparently, Willard has had to use Skeeter an awful lot lately.

That pile of bodies, however, will eventually wake up during a rare 50-degree heat wave and threaten Stars Hollow with a zombie apocalypse! Willard’s library ends up being ground zero in a showdown between the living and the undead, Democrats and Republicans, and atheists and religious fanatics. How “extreme” does this story get? Zombies enrage Willard when they eat his library books, but later he is moved to look at them like “the other 47 percent” — i.e. victims — when the stiff-limbed “unholy demons” incur the wrath of a certain maverick Republican.

Which, of course, brings us to the most polarizing character in town: Mrs. Sarah Palin, a descendant of the former vice presidential candidate. She is a wealthy Republican who lives in a cozy biosphere even though she scoffs at the New England cold compared to the weather in her ancestral home of Alaska. She has a husband named Dude, she hates Mayor Limbaugh and, when the going gets tough, she flies around in armed helicopters. As if that weren’t enough, she also is described as the town’s most abusive library patron.

In the midst of all this outer turmoil, poor Willard is still trying to figure out his love life. He is torn between old flame Lorelei and much younger flame Merrily, a mail carrier for the United States Fedex/Parcel Postal Service. As it turns out, clueless Willard has a lot more to learn about both women — one is a werewolf in librarian’s clothing; the other a closet vampire whose “house” stands three feet above ground and the rest underneath. Talk about a supernatural love triangle. And wait until you find out Merrily’s last name.

I highly recommend Pansini’s e-book to anyone with a pulse and even those without one. Librarians and political junkies, especially, will get a big kick out of this romp. It struck me as a “Naked Gun” of the 22nd century. I definitely could picture the late great Leslie Nielsen playing Willard M. Romney III. Of course, Mitt himself certainly could play the part — that is, if he has some free time after Nov. 6.

Who knew a tale spun from the shelves of a library could be so cool? Which reminds me: if you bring your book back late at the Stars Hollow Public Library, you must pay your fine in yuan. That’s right. The dollar is dead. Chinese currency rules America in 2112.

I’ll leave you with a dozen-deep sampler of Pansini’s funny one-liners and dialogue exchanges:

1. Willard had the good fortune to be born in 2050, shortly before the U.S. turned into a giant vanilla sorbet.

2. (Willard) knew he needed a new roof installed, but all of the Mexican roofers had self-deported decades ago.

3. Willard further assumed that if there really was a Heaven, then its library would never be polluted by teen fiction.

4. Willard was asked if he would consider shooting the zombies with Skeeter.
“No options are off the table,” he replied.

5. Did (Willard) really want to get involved with a woman (Merrily) who so blatantly overused the exclamation point?

6. Frigid air poured through the broken window like shoppers at a Black Friday sale.

7. “Where could these zombies have come from?” Willard asked.
“New York,” Lorelei replied.

8. Willard: “Why does everyone look to Lorelei in a crisis? I’m the man here, I’m older and I’m the adult services librarian. She’s merely a children’s librarian. I make more money!”

9. Mayor Russell Limbaugh: “Damn Republicans. Obviously they haven’t budgeted for a zombie apocalypse … (but) they’ll give tax breaks to corporations for moving jobs to equatorial Africa.”

10. On Herman Kane being elected president in 2020.
Limbaugh: “Nine-nine-nine — the guy spoke like a damn Nazi.”

11. On observing the zombies eating classic books instead of teen fiction:
Willard begrudgingly admired their taste in literature.
And later …
Willard to Lorelei: “How can I relax when my books have become finger food for the undead?”
And lastly …
Willard to Lorelei: “You made me turn over the entire children’s collection for a zombie picnic.”

12. Willard’s lucky shot with Skeeter connected with the gas tank on a One-Percenter’s helicopter causing it to explode in mid-air.
Down upon Willard rained Gucci shoes with the feet still in them.

John Pansini’s e-book, priced at $2.99, can be purchased at his website: http://twilightofstarshollow.com.

Jack Chaucer is a book blogger and author of the new political sci-fi e-book “Queens are Wild,” which is priced at $0.99 at his website: http://www.smashwords.com/books/view/205805