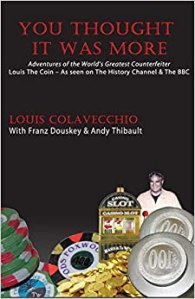 Four weeks, 120 pages written … the first draft of my screenplay for COIN MAN, the adaptation of Louis “The Coin” Colavecchio’s mob and counterfeiting memoir YOU THOUGHT IT WAS MORE, is complete. Here’s a teaser scene with Louie providing voice-over …

Louis is driving his red Honda Accord toward his new shop in North Providence and thinking about the 1980s. He looks in the rear-view mirror. The faces of the dead replace his own as he reflects on the bad times.

I think Ann put a curse on me for a whole decade. The ‘80s sucked. Not only did I lose Vincent right after the divorce, but later my parents died a year-and-a-half apart … my father from pancreatic cancer, my mother from a broken heart. Mob boss Raymond Patriarca — yeah I can say his name now, he’s dead, too — mentioned plans to whack Joe Barboza after the FBI had bugged his office, then got seven years in prison after the feds offered Joe immunity to testify. Raymond died of a heart attack and Joe got shot in a phone booth in California while using one of my Marlboro gadgets to make a call. What the fuck? Then Ronnie Coppolino told an annoying little mobster to go fuck himself during a card game. The old bum left, came back and shot Ronnie in the head. What’s this world coming to? And if all that wasn’t bad enough, my financial situation went from bad to worse with bust-outs of Foreign Car World, Dairy Land Insurance and Trop Jewelry. It’s about fucking time I take matters into my own skilled hands and change my luck.

Louis slows down as he drives past the North Providence police station, stares at the parked cruisers outside and smiles like he’s daring the cops to catch him.

What I’m about to pull off, right under the cops’ noses, the feds one day will call the “largest case of counterfeiting of casino gambling tokens in the U.S. — ever.”